Remote guarding is achieved by the use of new technology that utilizes video analytics-enabled cameras to serve as “digital guards” watching over outdoor facilities and premises or indoor areas and monitored from our 24 Hour Monitoring Center. Each camera is intelligent enough to distinguish between a car, dog and human and will generate an alarm when specific rules are broken, such as person detected in unauthorized area, travelling in the wrong direction, breaching perimeter, etc. When a breach is detected, the system will send a video clip of the event, to Hawkeye’s Monitoring Centre. Our Operator would be able to review the clip to see what caused the alarm as well as view a live video stream. Our Operator would be able to determine if the alarm is genuine or not and dispatch our Armed Response Team and or the Police. It is possible for the Operator to have two way audio communications with the location if the system is designed to do so.

Remote Guarding is ideal for:

CheckVideo is a cloud-based intelligent video surveillance and alarm verification system. It’s smart detection tools, detects people or vehicles entering unauthorized areas and immediately send alerts to your email as well as Hawkeye’s 24 hours monitoring centre for immediate response. Our monitoring center will see a video clip of what caused the alarm and can immediately verify whether the alarm is genuine or not. This enables your video system to immediately capture crimes in progress rather than after the fact.

The cloud based solution also eliminates the need for you to have a dedicated server since the recording is done in the cloud, thus making the installation more affordable. CheckVideo can integrate with your existing Analog CCTV system or you can deploy new cameras.

Videofied is a unique video verification system that uses wireless motion viewers (motion detectors with a built in camera) and other sensors to detect intruders and immediately notify Hawkeye’s monitoring center of the alarm along with a 10s video clip of the alarm. Hawkeye can then verify and dispatch an armed response team if needed. What makes Videofied unique:

Here’s some actual footage from the system

Already have a security system? 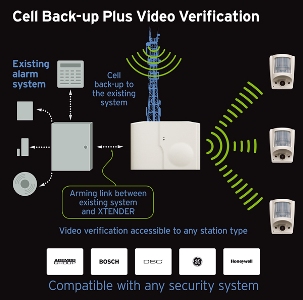 The XTENDER is the perfect solution. The Videofied® Upgrade is added to the existing security system and provides an additional layer of security.

VideoIQ is the inventor of the best performing, yet simplest, proactive surveillance system available today. Based on award-winning adaptive analytics, VideoIQ provides a suite of powerful, all-in-one systems that deliver superior accuracy, maximum range and self-calibration.

Our Hawkeye Security solutions keeps
you and your assets safe 24 hours per day.

For More Information About Our Products And Services
Contact Us Today!